With all the fuss, fanfare and hi-tech most road races have adopted, there are thankfully still a few old school races around. The Hellbender Half Marathon & 5K is one of them.

How old school? No on-line sign-up available, but you can download a mail-in application from the race website. Race registrations are mail-in and day-of sign-up on-site only. No chip timing here with results based on gun time.

Having said the Hellbender is old school, it is  also as professionally and efficiently directed as any race in the region. Co-sponsored by the Susquehanna Ridge Runners Club, the course was accurately measured and timing was accurate. Results were available and awards announced in a timely fashion, even as race officials worked under tents in a strong downpour.

If you are a runner who has an interest in the cause supported by a given race, you probably won’t find another that specifically benefits the environment of the Hellbender, an aquatic salamander native to the area. These creatures breathe through their skin, so their survival depends on the health of the streams. The race benefits the work of the Roaring Creek Valley Conservation Association.

As was typical of this year’s summer, race morning was warm, 75 degrees at the start, and humid. The area is deeply forested and as I stepped from my car, I reached for the bug spray. After their initial greeting, the insects kept a distance. After a warm-up mile, I  lined up with a couple hundred runners who had found their way to this particular tract of the Pennsylvania Weiser State Forest. The surface was typical forest road, primarily gravel on  the hard-packed dirt surface. Roughly half of the out-and-back course is along a stream and a lake, the remainder tall forest on both sides, with the occasional state forest building back from the road.

Although the course  is primarily flat, there is a slight incline going out and, thankfully, a slight decline on the return.  I started out on pace, but by mile four the humidity was like an anchor tied to my ankles. Thankfully, water stops along the course were well placed and well stocked. By the time I reached the turnaround, I was doing my I-don’t-care-anymore-just-let-me-finish pace. It got better. On the return, the very slight loss of elevation felt good as did a few raindrops that spattered down. I picked up my pace even more during the final mile as the spatter turned into a full deluge with fat raindrops popping off the bill of my cap.

Well shy of my usual pace, I still was pleased to finish in 2:05 and change, earning first place in F65-69 age group.

Post-race food was  ample with a variety of homemade sandwiches on fresh bakery rolls, cut-up fresh fruit (my personal favorite) along with chips, bananas and a few other treats.

Already drenched, I munched on the goodies while trying to keep the food dry and chatting with runners who do the Hellbender every year. On my walk to the car, I stopped by the massage tent  where they worked some magic on my tight quads.

Thanking myself for adding a large towel to the bag, I poured some extra water over my muddy legs before drying off and scurrying into fresh dry clothes. Thankful for another invigorating race experience, I was back on the road.

The sixth year of the Hellbender has come and gone, but if it sounds like your kind of race and you’d like a drive through rural Pennsylvania, pencil in the 7th on your August race schedule. 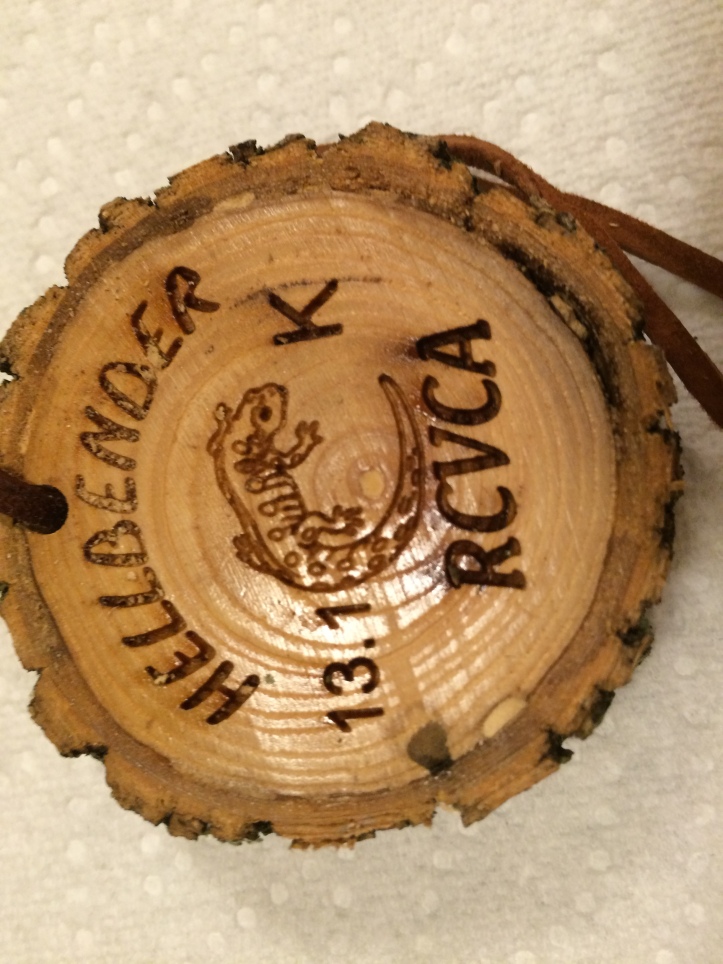