Writers and artists who made a home for themselves in Paris, particularly early and mid-twentieth century, are an intriguing group. You can’t poke around Paris too long before running into the haunts of writers, painters and entertainers of that time.

I love to walk or run the streets of whatever city I am in and the streets of Paris with their history are most inviting. In searching for their spirit, I found that using the Frommer’s do-it-yourself walking tours as a base and adding my own scattered knowledge and serendipitous finds to the mix worked well.

One of the favorite haunts of many of the creative ex-pats was the Shakespeare & Company Bookstore. I found the original site (after a couple of wrong turns) at 37 rue de la Bucherie and it’s current location at 25 Quai de Montebello in the same neighborhood. It’s a fun bookstore with corners and crevices to tuck into as you browse through books. I particularly like that two books on the topic of running are currently featured on its website.

Ernest Hemingsway’s haunts and homes seem to be well documented. Here I include a photo of the building where he shared a 4th floor walk-up with his first wife. After successful sales of his novel, and moving on to another wife, his apartment (lower photo above) is in a more impressive building. New wife, new life.

Thanks for a great tour, Kev.

My only formal walking tour during my stay was with Walk the Spirit, specializing in background on black intellectuals, artists, and musicians in the early 20th century and the their impact in Paris and beyond. Authors James Baldwin and Richard Wright, dancer and actor Josephine Baker (learned that she was also a spy for the French resistance), and many more moved to Paris for artistic and economic freedom where they did not experience the constraints of American society of the time. 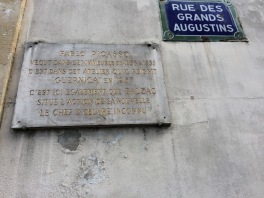 Artists migrated from other European locations as well. In his mid-20’s, Pablo Picasso found his way to Paris where he worked in the building photographed, reported to be the location where he created Guernica. I’ve wondered what Picasso would have thought of the street art/graffiti filling the walls of this former atelier.

Not far away, the Picasso Museum sits back from the street where visitors line up in droves. (To find a Picasso exhibit near you, check the Artsy site.)

And let’s not forget about the booksellers along the Seine who have displayed their wares through the previous century and do so to the current day, selling their miscellaneous literature and other merchandise, from the intellectual to the silly.

The marathon brought me to Paris and the marathon route brought us near many of the streets above. What a joy to have a few extra days to backtrack and explore the twists and turns of streets walked by those artists of an earlier era.

Leave a Reply to Still a Runner Cancel reply